// SPY-6 radars are built from radar modular assemblies that stack together to fit the mission requirements of any ship. Image: Raytheon

In 2013, the US Navy awarded Raytheon a $385m contract for the design, development, integration test and delivery of Air and Missile Defence S-band Radar (AMDR-S). Since renamed AN/SPY-6, the active electronically scanned array radar comes in four variants. SPY-6(V)1 is designed for DDG 51 Flight III variant of the Arleigh-Burke-class destroyer (AB); SPY-6(V)2 for Nimitz-class carriers and amphibious assault ships; SPY-6(V)3 – also known as the Enterprise Air Surveillance Radar (fixed variant) – for Ford-class aircraft carriers and FFG(X) guided-missile frigates; and SPY-6(V)4 for the DDG 51 Flight IIA variant of the Arleigh-Burke-class destroyers.

Despite supporting a wide variety of ships, SPY-6 uses a single architecture and software, and each array is constructed Lego-style from different numbers of the same cubic units.

“The navy needed that radar; we designed it in a way that would drive down the overall cost of radars across all the different programmes they could see in the future,” explains Scott Spence, senior director of naval radar systems at Raytheon Naval Programme. “We did that by developing what we call a radar modular assembly or RMA.

“The RMA is a building block that is scalable for all different sizes of radars. It’s a two-foot by two-foot by two-foot radar that works as a radar itself, and then we stack these together. For example, in the SPY-6(V)1 AB we’ve got 37 of those put together to make a radar face for the Flight III Destroyers, and there’s four of those radar faces on there.”

This allowed Raytheon to design once and benefit from the efficiencies that brings; smaller radars like the SPY-6(V)2, for example, use only nine RMAs with exactly the same technology. This drives down operation and sustainment costs across the lifecycle of these radars, which could be as much as 40 years. Operators and maintainers need to only go through training once and there is just one supply chain and depots for maintenance activities across all the different radars.

“The navy really had a lot of foresight when they were developing this programme.”

“All of those will have the same software configuration so software enhancements that come down over the years only have to be done once, inserting that baseline, and then all those ship classes will get that enhancement, upgrade or whatever that might be, driving down the lifetime cost of that radar.”

This approach means SPY-6 is prepared for emerging threats such as hypersonic missiles.

“The navy really had a lot of foresight when they were developing this programme,” says Spence. “They knew that they needed a radar that was going to be out there for the next 40 years, and the threats that radar would encounter would change all the time. So they made a radar that’s flexible in both software and hardware to be able to handle any emerging threats that we see today or in the future. Having that flexible architecture allows them to adapt to those new threats as they come on board.”

Raytheon’s latest contract with the US Navy is to deliver ship sets for the eighth and ninth DDG 51 Flight III destroyers.

“We’ve got nine Flight III destroyer radar sets on contract at different stages of manufacture,” says Spence. “They will be delivered first to the DDG-125 [Jack H Lucas] and then and then future Flight IIIs as well. Additionally, on the enterprise air surveillance radar programme, we are wrapping up the consumer testing on that programme and the contract material for the other two. That contract was in July 2019, and we expect to be in full contract for the production options this summer. 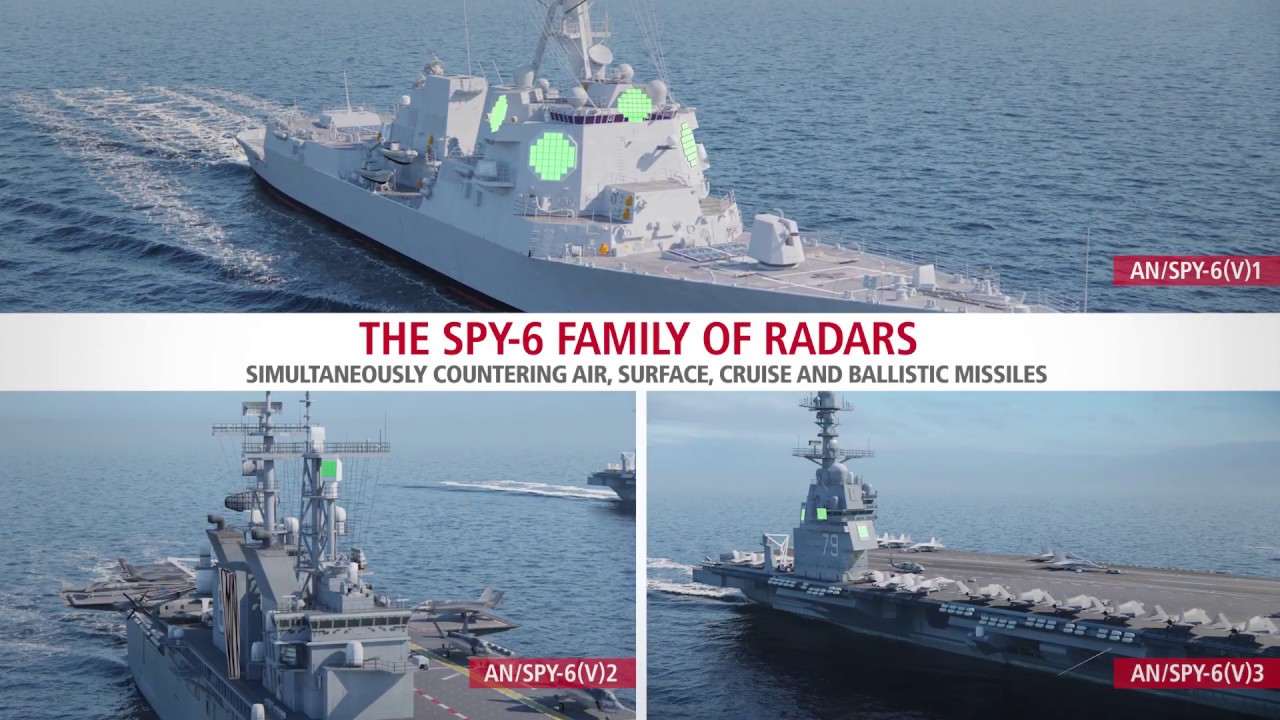 This Raytheon video showcases the SPY-6 family of US Navy radars.

Integration with other systems

Since the UK Royal Navy’s Queen Elizabeth aircraft carriers came into service, an important topic of naval strategy has centred around integrated aircraft carrier support groups, and SPY-6 has a part to play in the US Navy’s deployments.

“Certainly the air surveillance radar will go on both our Ford-class carriers starting with CVN-79 (USS John F. Kennedy, the second-in-class Gerald R Ford-class aircraft carrier) and back-fitted into the older carriers as they come in for their mid-life upgrades,” says Spence. “We’ll be putting rotating variants onto those.

“The navy will have the ability to tie all the information that’s coming from all their radars together as they look at different deployment concepts for their airstrike groups. This radar, because it has enhanced sensitivity and a longer range than previous-generation radars, can track many more incoming objects and allows the navy to reconsider their deployment options including carrier strike groups. You’ll have heard terms like distributed maritime operations, and this radar is integral to the concept of distributed maritime operations.”

“It’s a really exciting point in naval radar history where we can recategorise a fleet with this new capability and start bringing these benefits to the sailors.”

SPY-6 is also combat management system-agnostic, which means it can be connected to any system and provide the radar information required for that system to do its functions. It also allows data to be passed across multiple different networks to integrate with other radar systems that might be detecting different potential threats, or those from different angles than SPY-6 is addressing.

Looking to the immediate future, Spence says Raytheon is targeting DDG-125 as she gets ready to get built out and will be fitting SPY-6 radars later in 2020.

“It’s a really exciting point in naval radar history where we can recategorise a fleet with this new capability and start bringing these benefits to the sailors,” says Spence. “This radar is going to be deployed for a number of years and there are a lot of opportunities for upgrade. We see SPY-6 as the identified radar to go on the Future Frigate programme, so we see that as the next platform. Then, working with the navy, we’ll see what additional capabilities can go into the architectures.”