Armed and intelligent: The US Navy’s future UUVs

The US Navy is investing in unmanned underwater vehicles (UUV) for near-term deployment and looking into what their future capabilities could encompass. Berenice Baker takes a look at a recently tested system dedicated to keeping naval vessels safe by disabling mines, and future weaponised solutions that could engage enemy vessels.

The sea is big. Really big. You just won't believe how vastly, hugely, mind-bogglingly big it is, to misquote Douglas Adams. The interconnected systems of the Earth’s oceanic waters span some 360 million square kilometres at an average depth of over 3km, putting patrolling their depths beyond even the might of the US Navy’s fleet of 66 submarines.

The problem was succinctly communicated in a headline from an undisclosed publication that went viral on social media in 2015: “China may be using sea to hide its submarines”. The story behind it was a serious one; a US security specialist suggested that China could be using the deep waters of the South China Sea as a bastion where its submarine fleet could avoid detection.

One of the ways the US Navy is addressing the need to patrol the impossible vastness of the world’s oceans is to turn to UUVs and their slightly smarter cousins, autonomous underwater vehicles (AUVs). Both bristling with the latest in detection technology, they can be piloted or set to independently scan a target area and report back or, increasingly, act on the information collected.

The US Navy has demonstrated one of its immediate requirements for UUVs with the recently completed sea acceptance trials of the Knifefish mine countermeasure (MCM) UUV. And in the near future, UUVS could be used to stealthily disable or destroy enemy vessels: a recent navy request for information asked academia and industry for cutting-edge ideas on equipping UUVs with advanced capabilities.

Illustration of the Knifefish UUV integrated with other naval assets

Naval mines are a low-cost and effective way of deterring and destroying enemy vessels, and removing them is dangerous, time-consuming and often requires high-tech solutions, making it an example of asymmetric warfare.  As well as those laid as part of current conflicts, historical mines, especially the remains of the vast quantity laid during World War II, still pose a threat to naval fleets and shipping. MCM UUVs are an important way of addressing this threat.

In June, the US Navy and General Dynamics Mission Systems completed formal sea acceptance trials (SAT) of the Knifefish MCM UUV off the coast of Boston. As well as observing its performance in open sea, the team subjected Knifefish to a number of mission simulation tests using navy mine targets in simulated minefields, replicating the cluttered environment in which they are usually deployed.

The Knifefish programme dates back to 2012 when it was unveiled at a navy trade show. The 77kg, 5.8m long and 0.53m diameter UUV originated as the Bluefin-21 civilian undersea search robot, made by General Dynamics subsidiary Bluefin Robotics, before being modified for military use. It features an open systems architecture design, meaning that different mission packages can be quickly fitted depending on the operational requirements.

“The low-frequency broad band sonar will improve our capability to find volume and bottom mines in high-burial and high-clutter environments.”

Describing now how the navy will incorporate the UUV into its operations, US Navy spokesperson Lieutenant Lauren Chatmas said: “Knifefish, built by General Dynamics, is a medium-class MCM unmanned undersea vehicle intended for deployment from the navy’s littoral combat ship and other navy vessels, and will provide enhanced mine-hunting capabilities. The low-frequency broad band sonar will improve our capability to find volume and bottom mines in high-burial and high-clutter environments. The system introduces additional autonomy that will improve mission timelines and reduce risk to personnel.”

When Knifefish is deployed with the US Navy fleet, its host ship will remain safely entirely outside the minefield while the UUV is operated remotely, reducing risk to personnel.

General Dynamics Mission Systems vice-president and general manager Carlo Zaffanella said in a press release announcing the completion of the SAT: “The successful sea acceptance tests are the result of strong collaboration and teamwork between the General Dynamics and US Navy Knifefish team. These tests prove the Knifefish system can detect, classify and identify undersea mines in high-clutter environments.”

The next stage for Knifefish is the developmental test and operational assessment. To help navy personnel prepare, members of the General Dynamics Knifefish team trained operators during the course of the SAT. 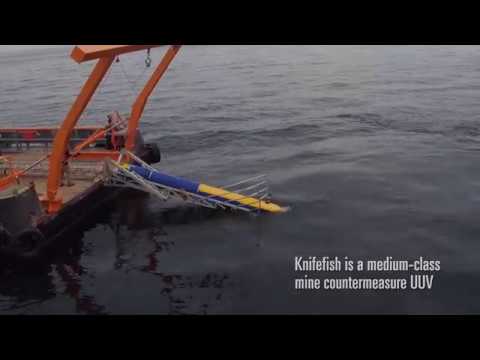 Looking to the future, the US Navy wants its UUVs that operate in shallow, cluttered regions along the shore to be faster and more accurate, and they could even be used to engage enemy vessels.

In May, the Naval Undersea Warfare Center Division Newport issued a request for information (RFI) for modular payloads and enhancements that could achieve these aims. The organisation said the goal was “to research, discover and evaluate technologies that will accelerate the delivery of advanced capabilities to UUV platforms and will provide an asymmetrical warfare advantage during UUV operations”.

“The navy said the payload could be lethal or not, and could form part of the UUV or be able to be carried and deployed by it.”

Engaging small vessels in the littoral environment can be risky, especially when attempting a stealthy operation. This is where armed UUVs could step in. The first RFI objective was to investigate UUV payloads that could stop or disable maritime vessels less than 50m in length – smaller than most military vessels. The navy said the payload could be lethal or not, and could form part of the UUV – weaponising the UUV itself – or be able to be carried and deployed by it. But it should not be readily reversible; in other words, the target should not be able to shake it off and go about its business.

To get this effector payload to the target accurately, the second objective of the RFI is to make UUVs faster and improve positional and placement accuracy. In keeping with the navy’s modular theme, they should be easily integrated into existing technology.

While these technologies could transform future littoral combat, do not expect to see any resulting proposed solutions in action anytime soon.

Chatmas explained: “The US Navy often leverages requests for information as a means to keep abreast on technology-related trends and for industry to share information, best practices, technology solutions and cost estimates for various systems or equipment. Information received is reviewed and evaluated for possible future use. Further comment regarding any RFI would be speculative in nature.”

Knifefish UUV in the water