Ratnik is more than a future soldier system; it represents how an overhaul of the Russian armed forces manifested itself in a modernisation of dismounted troop equipment. Samuel Cranny-Evans explains Ratnik’s constituent technologies and goals, its development timeline, and its trials and deployment.

The 2008 war with Georgia marked a turning point for the Russian Armed Forces. Reforms led by former Minister of Defence Anatoly Srdyukov and incumbent Sergei Shoigu have turned them into a modern and capable force. The Ratnik soldier system is reflective of how extensive these reforms have been.

Neglected and largely abandoned following the dissolution of the Soviet Union in 1991, the Russian Armed Forces (RuAF) had fought two brutal conflicts in Chechnya revealing flaws in equipment, tactics and recruitment before the 2008 Georgian War. The short conflict had been a success but came at an unexpected cost. Consequently, Serdyukov initiated a series of ambitious reforms that leveraged theories proposed by Soviet Marshal Nikolai Ogarkov, Chief of the Soviet General Staff from the 1970s to mid-1980s. They were designed to reshape the unwieldy Russian forces and prepare them for modern conflict.

There are multiple aspects to the modernisation and reform of the Russian Ground Forces. These range from the strategic need to develop conventional forces capable of facing NATO, to the operational need for improved reconnaissance at depth, and the tactical need for robust communications and battle management. This is borne out in several directions; digital radios are ubiquitous throughout the RuAF, automated command and control systems are to be found in air defence, electronic warfare and artillery formations, and the Ratnik (Warrior) soldier system equips Russia’s infanteers.

Ratnik is Russia’s answer to future soldier systems. Its origins can be traced back to 2011 when a modular system was presented at the MAKS air show.

By 2012 Ratnik was undergoing state trials, and Russia had initiated talks with Sagem of France, Italy’s Finmeccanica and Germany’s Rheinmetall about procuring future soldier components. State-0owned news agency Ria Novosti even reported in 2012 that Russia had attempted to acquire the French Fantassin à Équipement et Liaisons Intégrées – FELIN – future soldier system from Sagem during a period of good cooperation between Russian and European defence manufacturers. 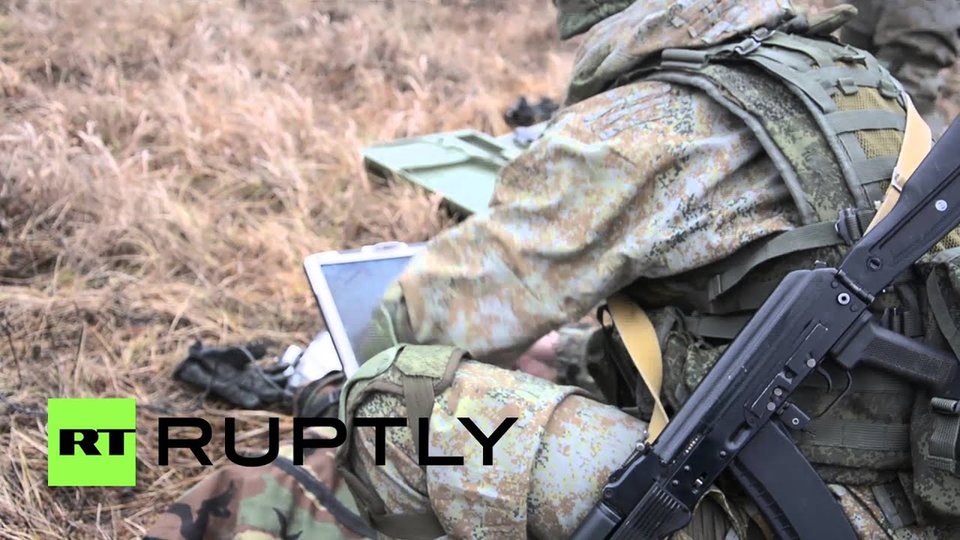 The original Ratnik system had been accepted into service and delivered to the reconnaissance elements of Russia’s airborne forces (VDV) by 2014. It is a modular system composed of as many as 40 different components that are tailored to meet the needs of the formation in question. So, a mechanised infanteer might be provided simply with a set of overalls, webbing and body armour.

However, a member of the VDV’s Spetsnaz special forces reconnaissance formations might be provided with the basic armour as well as the Strelets reconnaissance system, a satellite communications system and personal digital radio. Variants have also been developed for Arctic forces, which are designed to be waterproof and offer additional layers to keep soldiers warm in the extreme cold of the high north.

The overalls were reported to be made by the Russian company Kamenskvolokno using Alutex aramid, and Ria Novosti and Red Star claimed that they could withstand fragmentation from a grenade and were flame resistant.

The overalls form the base of most Ratnik systems, and a suite of 6B45 body armour is added to provide ballistic protection. Its basic configuration includes a breastplate, and shoulder pads are occasionally worn as well as a helmet. The ceramic breastplate provides Class 5 protection, which is sufficient to stop a 5.45×39mm round from an AK-74 assault rifle or a 7.62×54mmR round from an SVD Dragunov sniper rifle fired from a distance of 10m.

Altogether the overalls and body armour weigh 10 kg, although the protection can be extended to Class 6, alongside a complete set of shoulder and groin protective plates, which raises the total weight to 20 kg. This configuration is reserved for assault engineers, specialised heavily armed troops that are tasked to break through fortifications and machine-gun posts.

Mundane though the addition of body armour and protective overalls may seem, the ubiquitous nature of the protective system throughout the RuAF represents the extensive nature of the modernisation. Russian soldiers in Georgia for instance were deployed with steel helmets and ill-fitting and heavy body armour that provided worse protection than their Georgian opponents, an outward reflection of the sometimes low value placed on the lives of Russian troops.

The futuristic element of Ratnik is provided by the Strelets control system, which combines communications systems such as the R-168 series of digital radios, a targeting indicator and a tactical personal assistant (PDA). Two forms of PDA were discussed in 2015, the TT-E for commanders and weapons specialists such as snipers and machine gunners, and the AK-E for infanteers. The former includes a digital map on a touch screen display that provides locations of friendly linked units. The AK-E forgoes the digital map and provides the infantry with a digital compass.

Already in Syria, the Russian military has allowed soldiers to call in UAV strikes via Strelets.

The purpose of Strelets is to automate and coordinate the intelligence-gathering and targeting cycles, limiting the opportunities for human error. It enables the soldier to transmit data and voice messages with the tactical command post, as well as take images and video that can be transmitted back. The commander is provided with a computer for the coordination of their troops and the provision of orders and commands. Strelets has been used operationally in Syria, which may have led to further developments of the system.

“Strelets represents the continued evolution of the Russian version of multidomain/net-centric warfare concept that connects each soldier at the tactical level to the larger battlefield picture,” says Samuel Bendett, a research analyst with the US think tank Center for Naval Analyses.

“Already in Syria, the Russian military has allowed soldiers to call in UAV strikes via Strelets. Going forward, the envisioned concepts allows connected soldiers to accurately and precisely understand and react to the constantly changing battlefield scenarios and a changing combat environment via Strelets and its subsequent AI-enabled automated control systems.”

The original Ratnik soldier system has been modernised and improved, providing increased protection from multiple bullet strikes. State-owned defence and technology conglomerate Rostec has also announced developmental work on the third generation of Ratnik called Sotnik (Centurion). The system has been variously reported to include a micro UAV capable of conducting reconnaissance and electronic warfare, as well as an unpowered exoskeleton to support the additional weight carried by the soldier.

Sotnik aims to increase protection, and in 2019 Rostec reported that it would include specialised boots to provide blast protection from mines as well as an infrared and radar-absorbing coating designed to hide the wearer from thermal imaging and radar reconnaissance.

The introduction of the Ratnik soldier system into Russian service was part of the RuAF’s attempt to increase its conventional war-fighting capabilities. An iterative approach was taken, which may be an indication that it was seen as important to introduce the capabilities first, allowing tactics and doctrine to evolve around the new systems before upgrades and modifications could improve how they functioned.

This process will likely continue, ensuring that the key elements of a Russian manoeuvre formation – the reconnaissance and fires assets – can communicate in near real time, even on a fragmented battlefield.