The US Navy has awarded Boeing contracts worth a total of $274.4m to produce five Orca Extra Large Unmanned Undersea Vehicles (XLUUVs). Based on Boeing’s Echo Voyager prototype UUV, the 15.5m-long submersible could be used for mine countermeasures, anti-submarine warfare, anti-surface warfare, electronic warfare and strike missions. Berenice Baker finds out more.

When it comes to robot submarines, the US Navy believes in the principle of go big or go home. It needs much larger, longer-range and longer-endurance robot submarines to operate across vast tracts of ocean entirely autonomously.

Its vision is to have them swim from port to an area of operation, loiter there, establish communications, deploy payloads then navigate home. The smaller tactical UUVs the navy currently uses can prove expensive as they need a manned support vessel nearby and have limited endurance.

In October 2017 the US Navy selected Boeing and Lockheed Martin to participate in the design phase of its Orca XLUUV and in May awarded Boeing a contract modification to deliver five of its XLUUVs and associated support elements.

US Naval Sea Systems Command spokesperson Alan Baribeau said of the selection: “The Orca XLUUV is a multi-phased accelerated acquisition featuring a full and open competition to industry to design, fabricate, test and deliver systems to the US Navy. The navy selected the best value of price and technical capabilities.”

Boeing is basing its design on its Echo Voyager, a prototype XLUUV the company funded and designed itself for testing purposes only. Boeing says lessons learned from Echo Voyager have been incorporated into the Orca design to improve reliability and reduce risk.

A Boeing spokesperson said: “The vehicle has more than 2,500 hours of ocean testing. Echo Voyager completed its first phase of sea testing - or Alpha sea trials - in 2017 when it operated off the coast of Southern California for about three months to undergo system evaluations and testing.

“During that time, the Echo Voyager test team conducted a series of functional tests to verify Echo Voyager’s ability to operate on the surface, just beneath the surface and undersea. Ocean testing tasks included charging the battery, controlling the vehicle in currents and wave action, submerging the vehicle and returning to the surface. Echo Voyager returned to sea in 2018 through early this year for Bravo sea trials, designed to expand the operational envelope from the initial test series.”

According to Boeing, Sea Voyager offers a range of 6,500 nautical miles and months of operation on a single fuel module. As GPS operation is only possible at the surface, it uses a Kalman filtered inertial navigation unit aided by a set of doppler velocity logs, and depth sensors to navigate underwater.

The 45.4 tonne vessel offers a modular payload capacity of up to 56.6 cubic metres and 7.3 tonne dry weight over a maximum length of 10.4m, and mission payloads are powered by an 18kW battery.

Baribeau says: “The modular design for the initial Orca XLUUV will enable current and future payloads, sensors, autonomy and other systems to be able to be integrated over the vehicles’ life cycle.”

While the Orca XLUUV is intended to perform a variety of missions, the US Navy has not revealed specifics of its intended operations or any stealth capabilities.

Delivery of the five units will take place sequentially, with the first planned for the end of financial year 2020 and the contract expected to be completed by December 2022. According to Baribeau, the Orca XLUUVs will undergo a rigorous integration and test plan with the contractor and an independent government testing and military user assessment before operational use. 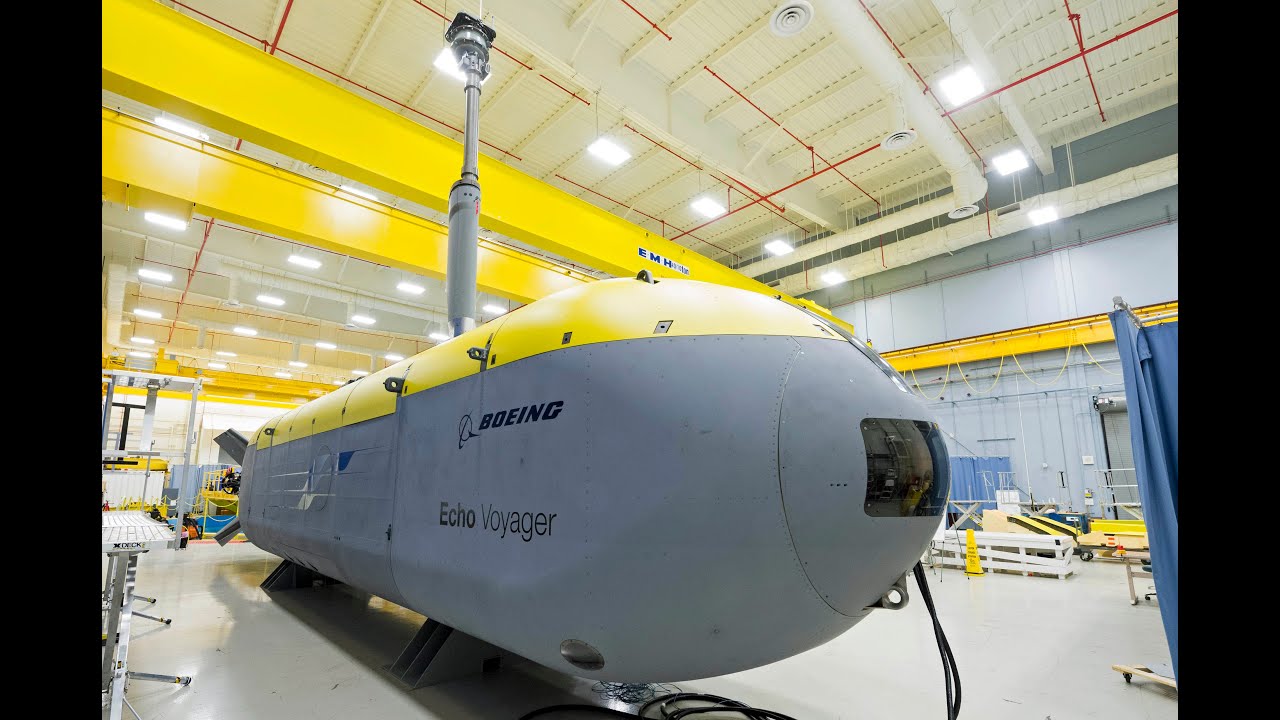 Boeing shares insights into the development of the Echo Voyager

XXL across the pond

The US Navy’s Orca may not be the biggest autonomous fish in the ocean for long. The UK Ministry of Defence’s Defence Science and Technology Laboratory (Dstl) launched a two-stage £2.5m competition in April seeking solutions that inform future capability and understanding of the utility of XLUUVs. The first stage will carry out research and development of an autonomous control system using an existing platform, and the second stage will test these over the duration of two years.

Ultimately the MOD is looking for a solution to carry out covert intelligence gathering and provide an anti-submarine warfare barrier. It will need to operate independently for a minimum of three months at distances of up to 3,000 nautical miles from where it is first deployed, and carry and deploy payloads of up to two cubic metres and two tonnes.