Eurosatory 2018: the best of the tech

Military technology specialists descended on the outskirts of Paris over 11-15 June to showcase their latest wares at the Eurosatory defence and security event. Berenice Baker reports on a selection of eye-catching technology that was on show.

Eurosatory, which calls itself the international land and air-land defence and security exhibition, was founded in its current format in 1967 and takes place every two years, alternating with DSEI in London. The 2018 event saw 1,802 exhibitors from 63 countries present their innovations to 57,056 visitors from 153 countries at a venue covering several hectares, indoors and out.

Given these numbers and the show’s 600-plus page doorstop of a catalogue, a comprehensive exhibit overview would be impossible, so we have identified some key themes and picked out stand-out innovations.

With the focus on land warfare, it was no surprise that several manufacturers used Eurosatory to showcase their latest armoured vehicles.

French-German KNDS Group (Krauss-Maffei Wegmann and Nexter Defense Systems) unveiled the European Main Battle Tank (EMBT) technology demonstrator, which consists of the KMW Leopard 2A7 MBT platform fitted with the Nexter Leclerc MBT turret. According to KDNS, "the EMBT is a short-term response to the operational need of the market for high-intensity battle tanks".

The other key Scorpion armoured vehicle at the show was a prototype of the Jaguar Engin Blindé de Reconnaissance et de Combat 6x6 combat and reconnaissance vehicle.

“The  European Main Battle Tank is a short-term response to the operational need of the market for high-intensity battle tanks.”

BAE Systems displayed the MkIV iteration of its CV90 Infantry Fighting Vehicle integrated with iFighting, which the company says fuses together data from different systems within the vehicle to filter through and prioritise the most critical information.

Read next month’s Global Defence Technology for a full write-up of all the major Eurosatory armoured vehicle news.

Jostling for space alongside the vehicles that have already been (or will soon be) fielded were a number of concept vehicles that would not have looked out of place in a near-future sci-fi drama like The Martian. Generally lightweight, angular and somewhat insectoid monocoque designs with a wide field of view, they claim to have been built from the ground up around the combatant to optimise survivability, lethality and mobility.

One example from Israel’s Carmor was the Mantis Tactical Armoured Fighting Vehicle (AFV), a lightweight all-terrain platform that comes in four variants: a double cabin pick-up with five seats, a single-cabin with three seas and more pickup capacity, an enclosed capsule with eight seats and an open buggy.

“We decided to put together what we believe a customer needs instead of what they say they want.”

CEO Eitan Zait explained the vehicle’s raison d'être, saying: “AFVs are usually built to a customer requirement in response to an RFI [request for information]. We decided to put together what we believe they need instead of what they say they want. We started with a team of experts including designer Amos Boaz and built it around human engineering and facilitation of operation.”

The Mantis already has its first customer, with another 20 under construction; the first step towards Zait’s modest ambition – he says he wants to replace all HMMVs in the world.

It was far from the only eye-popping design at the show - the giraffe-like UMS Viséo surveillance vehicle from Iris France stood literally head and shoulders above the competition.

Eurosatory’s live demonstrations took place this year at a new purpose-built external obstacle track, and for the first time included the French security forces RAID, GIGN, Prefecture of Police, Special Forces and Special Ground Forces. To a background of a thumping soundtrack reminiscent of TV’s Ultimate Force, different scenarios played out, such asterrorists taking hostages on a bus and refugees being intercepted by bandits.

"Armed robots barked warnings at suspects before shooting them."

In each case aerial or land drones would carry out surveillance before armoured or civil defence vehicles thundered on scene down unnecessarily precarious outcrops, occasionally soaking the front few rows with super-powered fire hoses, or armed robots barked warnings at suspects before shooting them. At one point, a section of the audience was moved while security experts and a bomb disposal robot investigated a ‘suspect package’ under a seat. While an entertaining spectacle, whether they swayed any potential purchasers was unclear.

For the first time, Eurosatory unveiled an area dedicated to 70 ground-breaking international start-ups in the defence and security domain. As well as taking part in daily Dragon’s Den style pitch sessions, researchers who would not normally have access to defence markets had the opportunity to showcase their wares.

Among these, French start-up Go Touch VR and American company FlyInside demonstrated how their combined haptic and virtual reality technology could revolutionise simulation solutions. Go Touch’s patented product, the VRtouch, is a haptic device that clips over a finger and transcribes the sense of touch when interacting with virtual environments, such as flicking a switch or pushing a button in a cockpit, making the experience more immersive.

“Our technology can be used everywhere and reprogrammed for any aircraft or helicopter.”

Touch VR marketing executive Charly Lacoume said: “Haptic feedback helps build muscle memory in a way VR alone can’t. While this could be achieved with a dummy cockpit, these are expensive. Our technology can be used everywhere and reprogrammed for any aircraft or helicopter.” 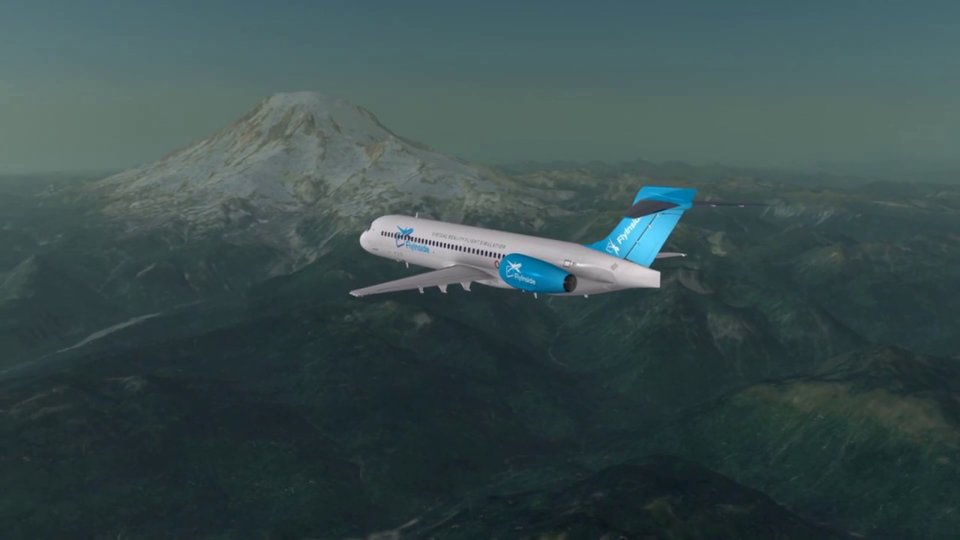 Still on the theme of aerial innovation, Cobham debuted its VigilOX pilot breathing sensor system, the first pilot-worn sensing system to comprehensively capture real-time physiological, breathing gas, and cockpit environmental data during flight. Based on earlier technology known as AMPSS, it is designed to help inform conditions around unexplained physiological episodes – such as losing consciousness during certain manoeuvres - in a way that monitoring just input gases could not.

VigilOX recently flew three test flights on US Navy F-18 and T-45 aircraft, and Cobham is working with the navy to review the post-flight data, which will be correlated to reported hypoxia-like symptoms. This data will form the basis of a predictive algorithm that will inform the development of oxygen equipment to automatically adjust oxygen dosage as needed to protect the pilot.

What happens when you give a robot a handgun? In the case of General Robotics’ DOGO ultra-light hand-held anti-terror robot, it could help resolve a hostage incident without putting human negotiators at risk. It features a locked carbon-fibre compartment where a small pistol, such as a Glock 26 or Sig Sauer P320SC, can be clicked into place. Despite being a low to the ground tracked vehicle, thanks to rear extenders it can climb stairs as easily as a flat surface.

“If there is a dangerous place, instead of sending people to check out what’s going on, we send a robot.”

Narrating a dramatic on-stand demonstration, General Robotics CEO Shahar Gal said: “Now we’re ready to engage. If we see a target or a terrorist, we can talk with him through an onboard speaker: ‘Drop your weapon’, and if he doesn’t listen to us, we can point a gun at him with point-and-shoot technology.

“All I have to do is click on the target on the video display and the gun will automatically aim. If we want to fire, we take the safety precaution down, and, as another precaution, press both buttons at the same time, and it fires. If there is a dangerous place, instead of sending people to check out what’s going on, we send a robot.”

DOGO also comes in a non-lethal variant with a pepper spray module and a launcher for tear gas, smoke or stun grenades. 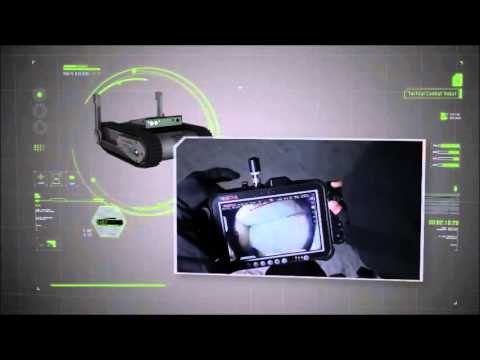